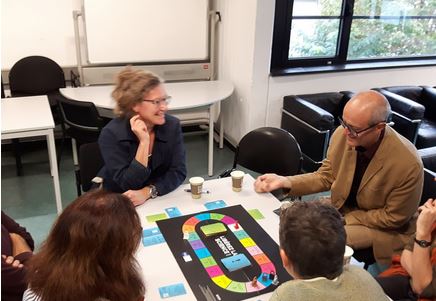 On the occasion of the international Open Access Week 2019, 31 library staff from the Université libre de Bruxelles played the Open Science game : “Libérez la science!”. Six games of 5 to 6 players allowed the participants to learn or refine their knowledge on open access, data management, scientific publications, and even to discover the amount of ULB libraries’ annual budget allocated to the purchase of printed and electronic periodicals…

All participated enthusiastically and some consider that they will retain much more what they have learned while playing than by following a classical training session.

Building on this library success, the game has been proposed to the University Research administration Department, where new games are scheduled with research support staff. Sessions will also be organized for the researchers of the Faculty of Architecture during lunch time, and in the framework of a seminar on article publishing organized each year for the PhD students by the libraries.

The files of the game “Libérez la science!”, adapted to the Belgian context and to the ULB, are available under Creative Commons license on Zenodo ( https://doi.org/10.5281/zenodo.3522126 ).